As we soon drift into November you may be forgiven to think that as vets our work in game bird health and disease control has all but ended. In actual fact, it is at this time of year that we, alongside game keepers, face some of our toughest challenges in controlling pathogens and maintaining ultimate bird health for flight. Partridges and pheasants are well on their way into adulthood, but as the climatic conditions cool and their distribution across different habitats expands they become exposed to greater threats of disease, predation and nutritional variation.

During rear, game birds are fed a pelleted ration. This feed has been designed, manufactured and processed into a consistent concentrate containing high levels of proteins, minerals, oils and fibre that are essential for growth and development. The pellet is very palatable and easily digested by the birds. Quality feed comes at a cost, this is why traditionally at release pheasants are moved on to being fed whole wheat.

Whole wheat is often inconsistent in quality, has a hard fibrous outer shell and contains high levels of carbohydrates (sugar) and B vitamins. The change from a high protein diet to a high carbohydrate diet can and will disrupt the bacterial colonies within the bird’s digestive system, leading to gastrointestinal changes and potential bacterial and protozoal disruption. This feed change is coupled with an increase in natural foraging. This year, wild berries have had bumper yields and I have seen some severe gut disruption and ill health from birds gorging on sweet blackberries. When it comes to changing diets I highly recommended keepers do not force birds off the concentrate pellets. Instead this transfer should be dictated by the birds. Provide additional hoppers with wheat in and let the birds make the switch. Slowly remove access to pelleted feed until the transfer is complete. This process may take between 2-4 weeks. During these transfer weeks I suggest supplementing the water with Ultimate Acid, this will help maintain a low gut pH and has shown to help reduce gut instability during this time.

The health of wild game birds such as partridge and pheasants is heavily influenced by stress levels. Birds respond to stress acutely by releasing corticosterone causing physiological and behavioural changes to enable them to cope with the stimuli. When this response is elevated chronically it can be biologically costly and have negative impact on the bird’s fitness by weakening its immune system. In game bird production there are three potential chronic stress contributors: people, predators and parasites.

As vets, our major challenge is controlling the parasites. Gapeworm (Syngamus trachea) is the most common multicellular parasite we see and causes significant damage and irritation to the wind pipe and thus birds are seen to be ‘gaping’ or ‘snicking’. There are, however several other helminths that cause more, subclinical and chronic disease. The gastrointestinal worms such as The Caecal worm (Heterakis gallinarum), Hairworm (Capillaria spp.) and Roundworms all inhabit areas of the gut and causes chronic ill thrift in game birds. H.gallinarum is commonly found and can be picked up on a routine post mortem. The lifecycle is described below and once eggs are ingested lasts around 18-22 days in the bird, however eggs can stay viable in the environment for years. 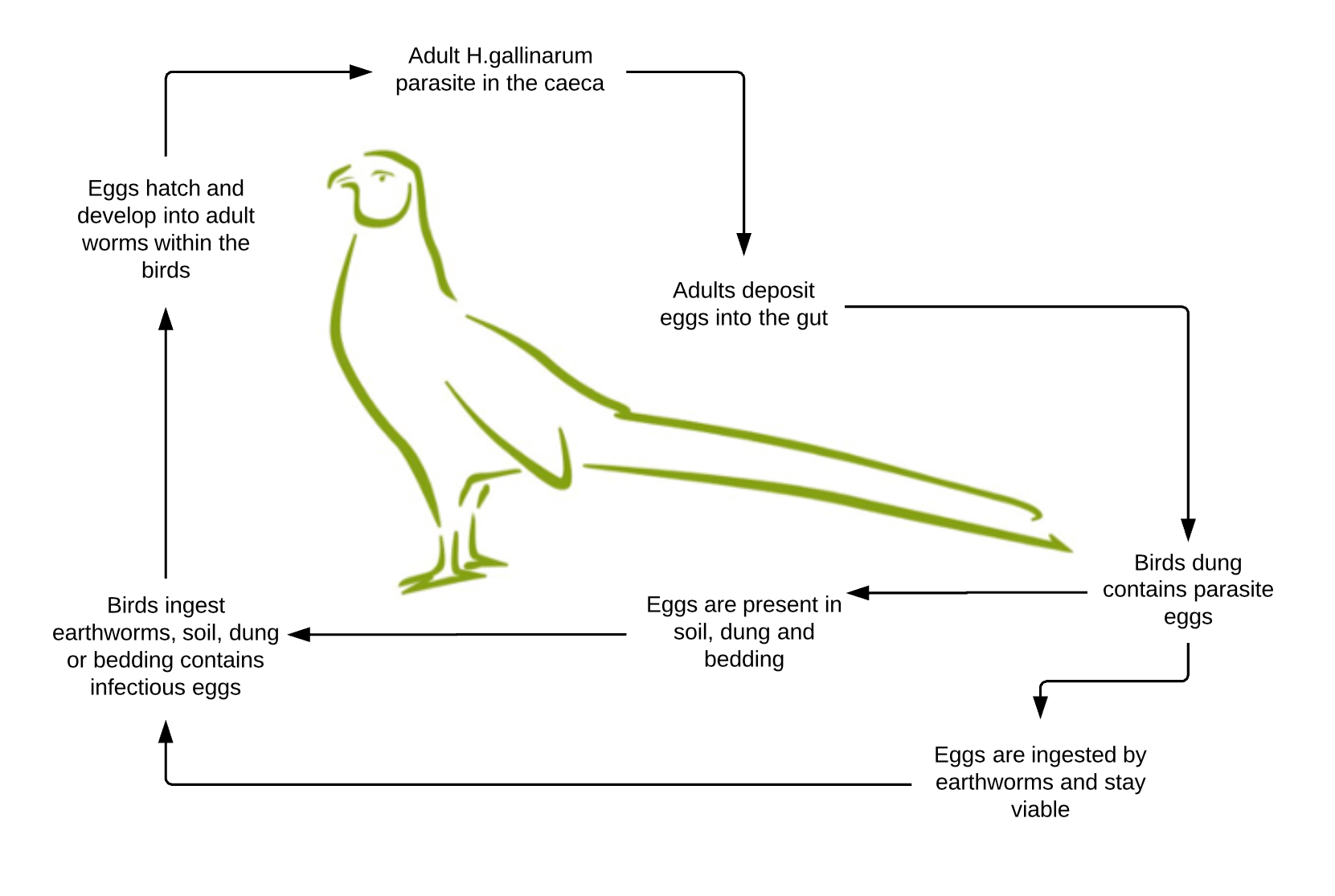 Treatment can be successful with a licensed drug such as Flubenvet incorporated in the feed. Additionally, we can prescribe in water treatment such as Panacur aquasol under the cascade should this be necessary. I suggest worming the birds 2 weeks after arriving in the pens to give them chance to pick the eggs up and for the adults to emerge in the caeca. Continue to worm every 2-4 weeks until release. One way of keeping track of worm burdens is to collect faecal samples and send them to our laboratory for WEC testing. I would also suggest a routine post mortem prior to releasing the birds, this way bird can be given the ‘clean bill of health’ before released.

To reduce the likelihood of increasing parasite egg burdens in the soils in and around the release pens, consider moving hoppers and drinkers every week to prevent the ground becoming poached. Spilt feed should be removed to discourage wild birds feeding from them.

Remember, the birds will be habituated to the release pens, any that are unwell or stressed will often stay around the pens as it’s their area of safety. Continue providing feed and water both inside and outside the pens, keep vigilant for disease and notify your vet if concerns arise. Early diagnosis and treatment can make all the difference to bird health and future viability of your released birds.